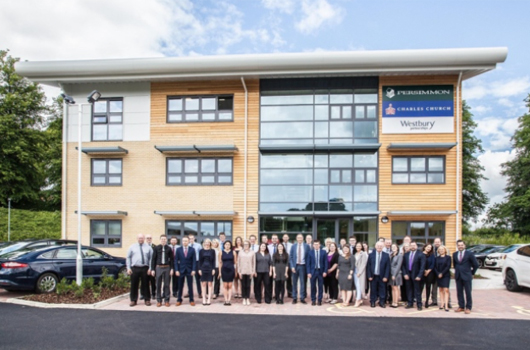 Persimmon Homes Anglia, the region’s biggest house builder, moved into its own new home at Bankside 100 in June.

Staff have transferred to the purpose-built headquarters from their previous offices near Lowestoft, where the company has been based since the 1970s.

Long-serving employee Gillian Keiley, who has worked for Persimmon for 25 years, performed the ribbon-cutting ceremony to officially open the new purpose-built building.

Andrew Fuller, managing director of Persimmon Homes Anglia told the Eastern Daily Press: “We have ambitious plans for further growth and need a headquarters that can accommodate that expansion. The more central location of Broadland Business Park will allow us to meet the targets we have set ourselves as well as providing first class accommodation for our staff.”

450 staff previously located in three offices at St Andrews Business Park in Norwich have now been brought together under one roof with the move.

The offices have capacity for up to 600 staff.

Speaking to the Eastern Daily Press, Jonathan Cawthra, group resources director, said: “This is a key mile stone for Clarion Housing Group. Due to the success of the previous Norwich base, we made the decision to consolidate our operations here and in time expect to become an even bigger employer in the city occupying this fantastic new space at Reed House.”

Clarion owns and manages 123,000 homes across the country and was formed from the 2016 merger between Circle Housing and Affinity Sutton.

Staff at Reed House will provide functions including housing management, finance, human resources, IT and marketing.

More information on Broadland Business Park is at www.broadlandbusinesspark.co.uk.

Lothbury Investment Management Limited is the manager of the Lothbury Property Trust ("LPT") and the Lothbury Global Feeder LP ("LGF") (together, the “Funds”). LPT is a sub-fund of the Lothbury Global Institutional Funds, which is regulated by the Central Bank of Ireland. LGF was established as a limited partnership in Jersey under the Limited Partnerships (Jersey) Law 1994 through the filing of a declaration of limited partnership. The Funds are alternative investment funds (“AIFs”) for the purposes of the Alternative Investment Fund Managers Directive (2011/61/EU) (the “Directive”). LIM has been appointed and acts as alternative investment fund manager (“AIFM”) in respect of the AIFs. For these purposes, LIM is authorised and regulated in the United Kingdom by the Financial Conduct Authority for the purposes of managing unauthorised AIFs (and for various other activities). The Funds are also unregulated collective investment schemes for the purposes of the United Kingdom Financial Services and Markets Act 2000 (the “Act”).

Certain jurisdictions may restrict by law access by their residents or nationals to the information on this website. The contents of this website are not intended to be accessed by, distributed to or used by residents or nationals of such jurisdictions. It is the responsibility of any person accessing this website to satisfy itself that its use of the website complies with the laws of any relevant jurisdiction. Under United Kingdom legislation, the promotion of units in the Funds by LIM is restricted by section 238 of the Act. The promotion of units by the Funds themselves or, in the case of LPT, by its trustees in the UK is restricted by section 21 of the Act. Accordingly, the information on this part of the website is directed only at and should only be acted on by:

The purpose of this website is to provide general information about Lothbury Investment Management Limited and the Funds. The Funds and Lothbury Global Feeder Limited but not any investors in these entities are clients of Lothbury Investment Management Limited. Nothing on this website is investment, tax or legal advice, nor is anything on this website a placement or offering to buy or sell units or any other investment. Tax treatment depends on individual circumstances and may be subject to change in the future. You should take your own independent investment, tax and legal advice as you think fit.

Subject to applicable law and satisfaction of any relevant notification or other requirement the Funds may be marketed (within the meaning of the Directive) within certain jurisdictions in the European Economic Area ("EEA"). Potential investors can request details of such jurisdictions from LIM. LGF is intended for persons who are not established or resident in the United Kingdom.

The information contained in this section does not constitute an offer or solicitation to any person or entity which is United Kingdom Resident for tax and investment purposes, to buy or sell shares or any other security whatsoever in other jurisdictions where it would be unlawful to do so, including but not limited to, Ireland and the United States of America.

Please tick that you have understood and accept the important notice set out above and agree to the matters addressed in it.